The Sagrada Família seen from the outside

Three facades, eighteen towers. From the very beginning of the creation of his work, Gaudí gave it dimensions that were out of the ordinary for its time. In fact, he knew that he would not see the end of the project. Leaving instructions to his successors, he wanted each generation of architects to bring their own style to the building.

Thus, since his death, each part of the Basilica has been built separately, one after the other, in order to reflect the new architectural styles of the different eras. Since his death, several generations of architects have succeeded one another to complete the work - not without some controversy - and without some surprises for visitors.

The project is due to be completed in 2026, the centenary of Gaudí's death.

The facades of the Sagrada Familia:

To gain acceptance for his monumental project, Gaudí decided to build the Nativity façade of the Sagrada Família first. Rich in decorations and ornaments, in contrast to the more austere Passion façade, he knew that it would immediately appeal to his contemporaries. This facade, which today faces Marina Street, was accepted both for its style and its message.

Built in 1894 and 1932, it offers three large portals representing Hope, Charity, and Faith. 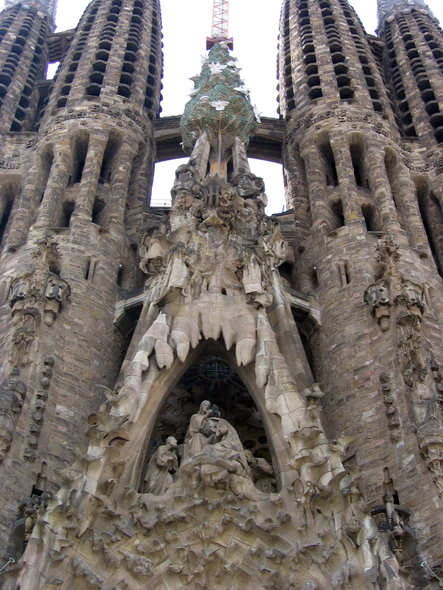 A cypress tree in the centre between the four towers symbolises the tree of life. A cross is the symbol of God the Father. Also present are Christ and the Holy Spirit.

The message relates the human part of the life of Jesus and his family.

The sculptures on the three doors - Door of Hope, Door of Faith, Door of Charity - depict, for example, the betrothal of Mary and Joseph, Jesus as a young man working in his father's carpentry shop, and the annunciation.

The style represents nature, life and creation. It is in fact exuberant and rich in symbols: tree of life, doves, pelican (Eucharist), turtle (longevity).

According to Gaudí's wishes, the Passion façade of the Sagrada Família is the stylistic opposite of the Nativity façade. Its angular and extremely bare ornamentation evokes the suffering of the torture and death of Christ. Gaudí made only one design for this façade. Its execution seems to be perfectly in keeping with his original idea. Numerous controversies, due to the very angular appearance of the sculptures by Josep Maria Subirachs, which were installed in 1990, have since marked the discussions on this "architectural cathedral" to the point of almost scuttling the work. Six leaning columns form a large porch with five arches, in which sculptures with sharp angles are nestled, exuding hardness and sadness. The aim here is to show the cruelty of the 14 stages of the Passion of Christ. 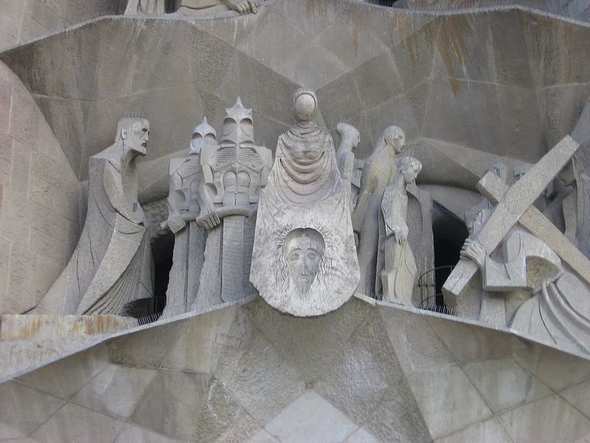 The Passion facade is divided into three levels. The first floor shows the Last Supper, the betrayal of Judas, the Flagellation of Christ, and the denial of St Peter.

The second floor shows Jesus talking to the women of Jerusalem.

Finally, the third floor shows soldiers playing, the Crucifixion, the Deposition and Lamentation and the Resurrection. This facade faces west, i.e. towards the setting sun, when the light becomes shadow and then darkness before regenerating.

The Façade of the Glory is the most recent of the three facades of the Basilica of the Sagrada Família. Work on it began in 2002 and it will serve as the main entrance to the nave. It is dedicated to the Celestial Glory of Jesus. That is to say, the stages on the way up to God: Death, the Final Judgement, Glory. Gaudí leaves it to the next generations of architects and builders, as was always the case in the construction of all the other cathedrals. He simply planned a monumental staircase, a crater with fire, a 20-meter high water jet divided into four cascades that would symbolize the rivers of the earthly paradise on the one hand and the fountains of the Apocalypse on the other. It is known today that seven large columns will be dedicated to: 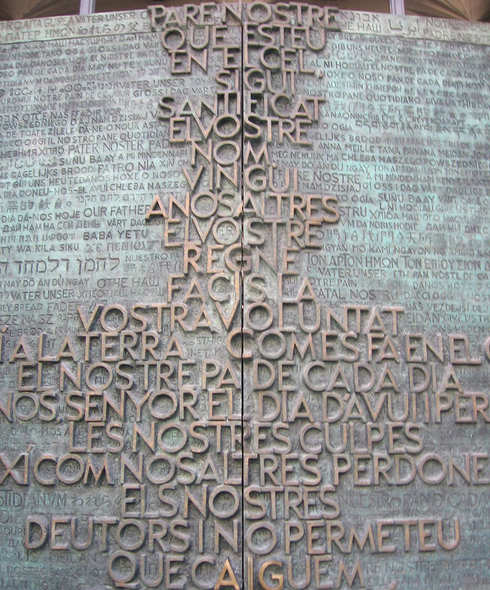 In 2008, two monumental doors sculpted by Subirachs were mounted on the facade of the Glory. The work continues.

The towers of the Basilica of the Sagrada Família

18 towers and spires make up the highest parts of the expiatory temple:

The tower on the Nativity facade and the towers on the Passion facade are mainly known because they are the two towers that can be visited with the "entrance ticket + towers".

The Tower of Mary is the most recent one, it was inaugurated on December 8, 2021 when the star of the Virgin, which overhangs it, was sealed. This 7.5 m diameter star now lights up the city of Barcelona with its 12 luminous points. 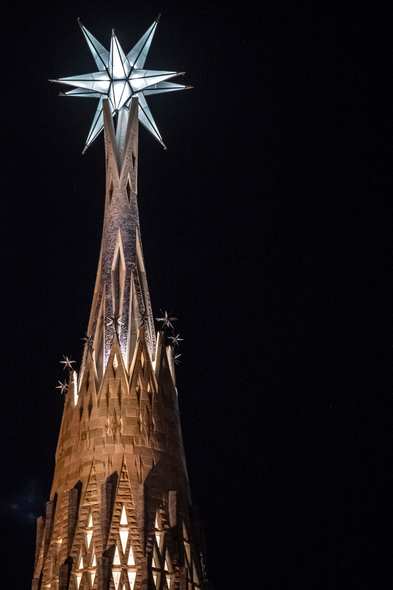 The Tower of Jesus will be connected by four bridges to the towers of the Evangelists. It will be topped by a cross with four bell-shaped arms and covered with glazed ceramic and glass. This is a final tribute to Gaudí with one of the most typical forms of his famous crosses. It will be 172.5 metres high, a few metres lower than the 185-metre high Montjuïc hill. Gaudí's building should not surpass God's creation. However, the Sagrada Família will surpass all the cathedrals in the world, including the 161.5-metre-high cathedral tower in Ulm Münster, Germany.

> The laying of the last stone of this tower will mark the end of the construction work on the basilica. An event with worldwide resonance that is expected to take place around the year 2026!

Visit the towers of the Sagrada Família

Which tower of the Sagrada Família to visit?

There are currently two towers of the Sagrada Família to visit. The so-called Nativity and Passion towers.

One of them is on the facade of the Nativity, where the towers are 98.40 m high on the outside and 107 m high in the centre.

So if you choose the Passion Tower you are a little higher than the Nativity Tower. The view of Barcelona is just as good on one side as on the other, only the orientation changes. 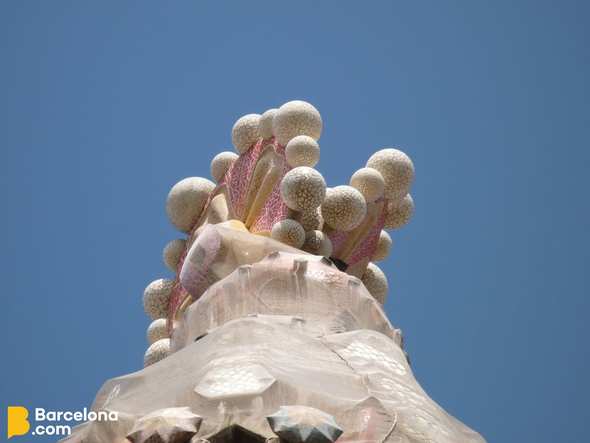 How to visit the Sagrada Família towers?

You can visit the Sagrada Família towers by taking the entrance ticket that includes the towers.

You can go up to the top of the towers by taking a lift. You come down on foot using a staircase. For this reason, during the Covid-19 pandemic, visits to the towers were no longer allowed due to the narrowness of the stairs.

It is also for this reason that visitors with reduced mobility and children under the age of 6 are not allowed to visit the towers.

How many architects have led the work on the Sagrada Família since the first stone was laid?

9 main architects have been in charge of the work since the foundation stone was laid on 19 March 1882.

They are as follows