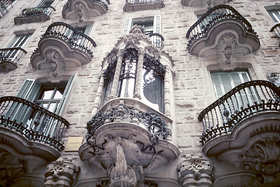 The Casa Calvet, built as a dwelling and offices for the textile manufacturer Pere Calvet, is the first and least imaginative of the three houses Gaudí designed for Barcelona's Eixample (Extension).

The interest of the Casa Calvet centres on the imaginative resolution of the rear façade, the decoration of the hallway, and the design of the furniture, purely organic and breaking with everything before it.

What most calls attention on the façade are the symbolic elements. Over the door, the owner's initial, C; and supporting the main gallery, a cypress, symbol of hospitality. On the main storey, the relieves represent mushrooms, because Pere Calvet was a mycologist. Above the gallery, the horn of plenty. The three heads of the crown represent Saint Peter the martyr (Pere Calvet's patron), Saint Genesius of Arles and Saint Genesius of Rome, patrons of Vilassar, in el Maresme, where the family came from. Last comment
Marvelous surprise
Elyn Aviva (23 Nov 2010 - 02:59)
We stumbled upon Casa Calvet Friday night--hungry, tired. The facade looked so attractive that we decided to chance it. Little did we know what awaited us. We had a marvelous dinner--attentive service, delightful Gaudí ambiance, and a really wonderful tasting menu. I have celiac disease and can't eat anything with gluten--a real problem in many restaurants. Here, they understood immediately and the chef made fine substitutions. They even gave me a rice cracker and apologized for not having any more! The iced anise-flavored orange cream was memorable. All in all, a memorable evening that we hope to repeat next time we're in Barcelona
Add a new comment View comments