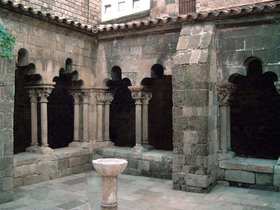 An air of countryside in the middle of the Raval. The cloister of the monastery Benedictine from the XII century will retain you for its quietness.

The church or monastery of Sant Pau del Camp (Spanish for Saint Paul of the countryside) is the oldest church in Barcelona. While the monastery now sits within the El Raval barrio of central Barcelona, it once sat outside the city; its rural location gave the church its name.
Construction began late in the ninth century, to replace a previous church destroyed by Muslim invaders in 985. Last comment
One of the more interesting cloistes in Europe
Josep Redondo Laporta (17 May 2015 - 08:22)
Sant Pau del Camp is the oldest church in Barcelona, and it's really intereting to visit for lovers of the medieval architectura.....very specially the cloister...with some visigoths elements.
Add a new comment View comments