There is only one place in the world where you can be photographed with 6 Ballon d’Or of the same player. Those are the ones of Leo Messi at the Camp Nou Museum.

Leo Messi, the most titled

All these trophies are in the Museum of the Camp Nou, in a space specially dedicated to one of the best players of all times. The Golden Shoes - which reward the best European scorer in a year - are organized in such a way that you can be photographed with two at a time.

For the Ballons d'Or, it's more difficult: Messi has won so many that the museum is running out of space! You can always choose the middle one to be immortalized with the 2015 Golden Ball and the Leo photo behind you.

Leo Messi's Ballons d'Or and Golden Shoes are undoubtedly one of the biggest attractions of the Camp Nou Museum. If you want to have the chance to have your photo without too many people, come to the museum at opening time or from 4pm. Otherwise, you will have to deal with the crowds from groups that come with tour operators.

The other Golden Ball of the Museum

And if you are a fan of the Ballon d'Or, you have the opportunity to see three more in the Museum of the Camp Nou: those of Luis Suarez - a Spaniard who played in Barça around 1960, Cruyff and Stoichkov. The first two are originals, the third a replica, by the way, like those of Messi .

The opportunity to observe how the design of the most prestigious trophy at an individual level has evolved over the years!.

Get to the museum with a tour, check our page Barcelona Stadium Tour.

By Olivier Goldstein, the founder and editor of the Barça Blog, the first 100% Barça blog written from Barcelona. He is also a sociologist and guide at Camp Nou. 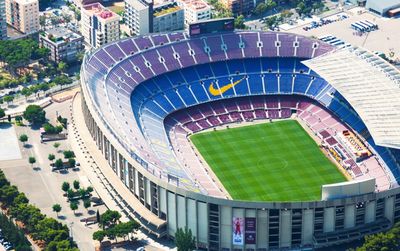 Step into the storied home of FC Barcelona

Enjoy a self-guided tour through the FC Barcelona Museum and the home stadium of Messi, Dembélé, Iniesta and more, and walk around the famous pitch surrounded by nearly 100,000 screaming fans (you'll need to imagine the last part)...