Casa Vicens (Vicens House) does not look like the other houses made by Antoni Gaudí like the Casa Milà or Casa Batlló. This was his first important commission, the inspiration is not yet naturalist, but already the genius of the architect shows in every detail of the building as well outside as inside. A work of youth that foreshadows what will become, a few years later, Catalan Modernism. A major work by Gaudi, the 8th and last to be rewarded by UNESCO!

The Casa Vicens was declared a UNESCO World Heritage Site in 2005 as "Works of Antoni Gaudí" in conjunction with the Güell Park, the Güell Colony Crypt, the Güell Palace, the Casa Vicens, the Nativity Facade and The crypt of the Sagrada Família, Casa Batlló and Casa Milà .. 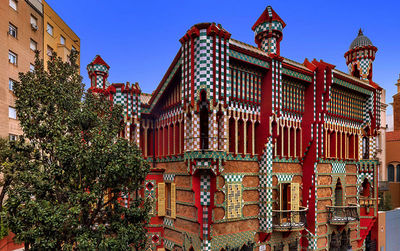 Casa Vicens is Antoni Gaudí's very first major work. His inspiration is not yet naturalistic, but the architect's genius is already evident in every detail of the building... 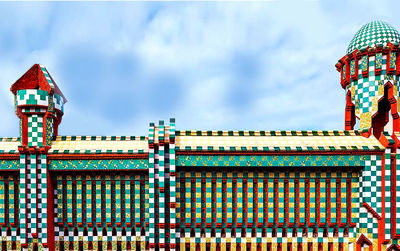 A beautiful initiation to the work of the Master!

To understand in detail all the symbolism of this place, Antoni Gaudí's creative intentions and to glimpse the continuation of his dazzling career. 75 to 90 minutes visit, in small groups!

Casa Vicens is open every day. Please note, however, that opening hours vary according to the time of year:

How to get to Casa Vicens ?

Access to Casa Vicens is quite easy with the city's public transport, at the end you only need to take a very short walk to reach the museum:

Where is Casa Vicens?

What to see in Casa Vicens ?

In the 19th century, exoticism from the East became fashionable throughout Europe, this fascination is reflected in all artistic expressions, a fascination strongly linked to the romantic movement. When Gaudí received the order, he was completely absorbed by this movement, even though he had already hinted at the same sensitivity. Taking advantage of Manuel Vicens Montaner's profession as a ceramist, he exploited all the advantages offered by his orientalist knowledge. The use of tiles, plaster, but also arabesques, coffered ceilings, marquetry, fountains and basins. The style of this house may recall the so-called neo-Mudejar in reference to the use of these artistic building materials used by Muslims for constructions built in southern Spain, especially in Seville, Toledo and Zaragoza since the twelfth century.

The garden of Casa Vicens

The garden is under the protection of Saint Rita, whose Mass continues to be celebrated here, every year on May 22nd. The garden shows, from his first work, all the creativity of the young Gaudí. Referring to Mediterranean nature and fauna, it already outlines its naturalistic vision of architecture. Palms, magnolias, roses, climbing plants originally surrounded this residence to make it a haven of orientalist freshness.

Casa Vicens was declared a UNESCO World Heritage Site in 2005 as "Works of Antoni Gaudí" in conjunction with the Güell Park, the Güell Colony Crypt, the Güell Palace, the Casa Vicens, the Nativity Facade and The crypt of the Sagrada Família, Casa Batlló and Casa Milà ..The exterior of Casa Vicens

Gaudí is still looking for his own style. The house is made of straight lines and seems very simple in its forms, but it is in the details that points his genius which is already inspired by nature. Thus leaves of dwarf palms serve as a model for the magnificent wrought iron grid that surrounds the building. These are carnations of India or tagets, again, which inspire the ceramics of orange and green color that cover the external wall. Bricks, colored ceramics and stones serve to reinforce, on the three other facades, geometric shapes and oriental motifs. Gaudi is young but already freed from the architectural constraints of his time.

The interior of the Casa Vicens

The interior of the house is 698m2. Its decoration is also inspired by nature and the nazari art coming from Granada. Floor with mosaics, walls adorned with climbing ivy, ceiling decorated with stucco stalactites.

The ground floor of Casa Vicens

Your visit will begin with the ground floor, which was considered at the time to be the noble floor, the place where people lived and received. There is an entrance, a central space that was the dining room that opens onto a gallery and a smoking room. Everything here is imagined by Gaudíwho had an incredible sense of detail. He is even responsible for the wooden furnishings of the rooms he supervised from beginning to end. The smoking room is a masterpiece of skill with its painted stucco “muqarnas”, decorative elements in the shape of honeycombs typical of Islamic craftsmanship, in vogue at the time. A true polychrome symphony of blue, green and gold with a motif of bunches of dates and palm leaves.

The decoration of this room is divided into three areas, the base made with tiles, the intermediate part with tiles made of papier-maché and the ceiling with a polychrome plaster muqarnas structure.

Another masterpiece is the dining room with its vegetal decoration on the walls and ceiling. A scenery decorated with 32 paintings by Francesc Torrescassana, a painter from Barcelona and a friend of Gaudi's who had a great success at the end of the 19th century. A short video documentary tells how these paintings were meticulously restored by Barcelona's best curators.

Was the intimate and private floor of the Vicens Family. There are three bedrooms, a living room, a bathroom and a magnificent terrace. We remain in the same vegetable and symbolic universe. The decoration of the ceilings offers ceramics and polychrome papier-mâché where green dominates. On the walls stuccoes symbolize ferns, reeds and rushes. A small room is topped by a golden dome and magnificent birds in flight, in trompe-l'oeil. In the bathroom, ceramic tiles colour the room in ochre, blue and white.

The second floor is now a space dedicated to the history of Casa Vicens. The visitor discovers models, plans, videos, infographics explaining the evolution of this house; from its construction to its renovation. This exhibition is entitled “The Manifesto House” because, as you have understood, this first work by Gaudí already reveals the beginnings of a genius in the making and its architectural language.

We are not yet at the breathtaking architectural creativity of the roof of La Pedrera, but Gaudí has already thought for this house that it was necessary to be able to enjoy the roof. Thus was born this roof terrace, bordered by a walkway. An ingenious system is used to collect rainwater. A small dome, tiles and coloured ceramics further strengthen the oriental spirit of the building. Thanks to a clever restoration, you can visit this terrace.

Casa Vicens was built between 1883 and 1885 in the peaceful district of Gracia in Barcelona. In 1883, Manuel Vicens i Montaner, stockbroker and broker, entrusted Gaudí with the construction of a summer residence. At that time, Gaudí was 31 years old and in his most orientalist period. One of the most characteristic symbols of Casa Vicens are the "clavelline" azulejos, a flower that Gaudí simply found in the garden of this house. The owner, Manuel Vicens Montaner, was a tile manufacturer who is not unhappy to choose this young architect of 31 years passionate about technique, stone, brick and tiles. The first idea of ​​Gaudí will be to draw inspiration from the carnations of India of the garden of the Casa Vicens to design the printed pattern of its tiling initiating thus what will later become his custom to use nature as model. Also influenced by oriental art (India, Persia, Japan), he made it a hallmark for this house, which will be received with enthusiasm by the Barcelona citizens of the time, much better than his future creations. 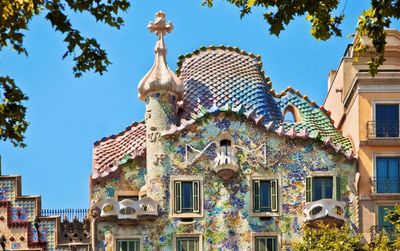 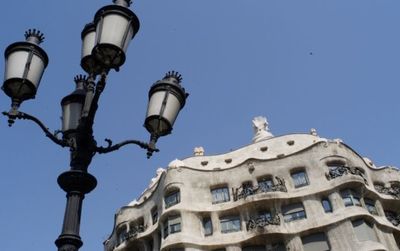