The history of the Sagrada Familia is inseparable from its brilliant creator Antoni Gaudí. At the age of 31, the young architect was chosen to take over from Francisco de Paula del Villar y Lozano in 1883, whose initial project, in the neo-Gothic style, lacked ambition, despite the laying of the first stone of the building in 1882. 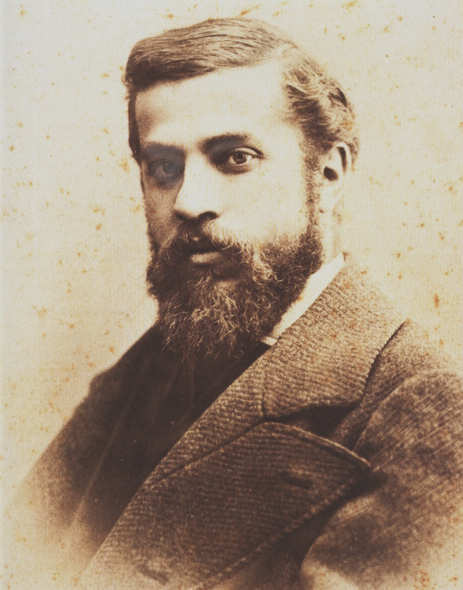 In a very short time, Antoni Gaudí i Cornet proposed a project of a completely different scale, radically innovative for its time. The Sagrada Familia was to be a temple with a naturalist-modernist tendency, consisting of five naves, three facades and eighteen towers, one of which, the tallest, was in the centre, symbolising Jesus Christ.

On the day of its completion, this tower of Jesus Christ will be the tallest church tower in the world at 172.5 meters, surpassing, for example, the 161.5-meter high cathedral in Ulm Münster, Germany. It will also be the tallest tower in Barcelona of any building.

The Sagrada Família, the most complex and unique of all Gaudí's works

In 1883 Gaudí also worked on other buildings that would begin to make him part of history, such as the Casa Vicens.

Deeply Catholic and religious, this new project would, however, change his life. It would be the most complex and singular of all his works, his absolute masterpiece, and he would devote 43 years of his life to it. 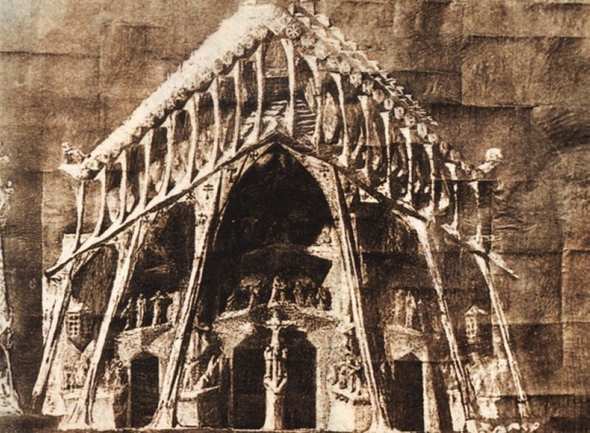 In fact, it was a radically different project from that of Villar that Gaudí proposed in 1883. He planned the construction of a temple with an architecture that was the product of his personal imagination, consisting of five naves, a crossing, an apse, an exterior ambulatory, three facades and eighteen towers, twelve of which symbolised the apostles, four for the Evangelists (135 metres high), one for the Virgin Mary (127.50 metres high, topped by the Morning Star) and the highest (172.5 metres high) in the centre to symbolise Jesus Christ.

Deep liturgical knowledge as a source of total inspiration.

With this project, the church becomes much larger than originally planned and its symbolism is totally reimagined. Mystical-religious references, the history and mysteries of the Christian faith, the stages of Christ's life, the heavenly Jerusalem symbolising peace... From his imagination and his solid liturgical knowledge, Gaudí thus defined a new religious architecture that would be called naturalist-modernist. Symbolic creativity never equalled to this day.

In the Sagrada Família Museum, you can discover a true technical innovator

In the Sagrada Família Museum - included in the entrance fee - you can discover some of Antoni Gaudí's inventions. Several drawings and models show the ingenious techniques he used to build the temple. 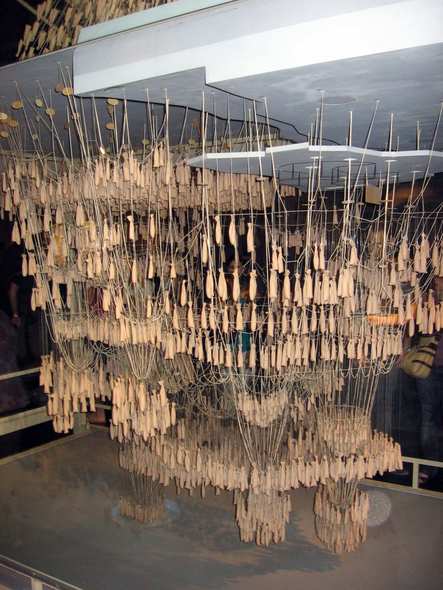 You can learn all about the hyperboloid vault and the helical columns of the Sagrada Família. You will have the pleasure of discovering a 4-metre high model made of strings and weights which, when turned upside down, allows you to calculate the load and the curvature of the vaults or the catenaries. An engineering genius well ahead of his time.

Alongside the construction of the Sagrada Família, Gaudí continued his work as an architect for the industrialists and patrons of Barcelona.
Today you can visit some of these monuments:

On 7 June 1926, on his way to the church of St. Philip Neri, Gaudí was hit by a tram, which left him unconscious. Mistaken for a beggar, without papers and looking unkempt with his old and worn clothes, he was not immediately rescued. Finally hospitalised, he died three days later, on 10 June 1926, aged seventy-three. 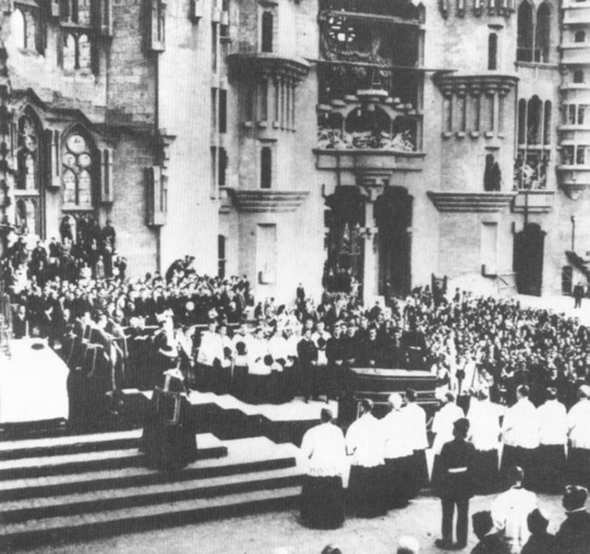 The funeral of Antoni Gaudí

Antoni Gaudí i Cornet was buried on 12 June 1926 in the chapel of Our Lady of Carmel in the crypt of the Sagrada Família in the presence of a huge crowd.

On his tombstone is the following inscription:

This can be translated as follows: "Antoni Gaudí Cornet. Native of Reus. Born 74 years ago, an exemplary man, an exalted craftsman, author of the admirable work of this temple, died in Barcelona on 10 June 1926, here the ashes of such a great man await the resurrection of the dead. R.I.P."

The Sagrada Familia after Gaudí

A very long construction that will end in 2026.

Gaudí understood that he would never see his work completed and that when he died, the project might be cut back due to lack of funding or interest. For this reason, he decided to raise the heights of the significant but not very functional parts outside the temple as much as possible: its towers, its apse, and its facades. In this way, he made it impossible to change the height originally planned, leaving an important mark of his very personal architectural style and, in short, a guide for the continuation of the construction.

One work but very different styles!

Gaudi left plans - many of which disappeared in 1936 when the Sagrada Família was sacked by anarchists during the Spanish Civil War - to give instructions to his successors. But he also wanted each generation of architects to bring their own style to the building. Thus, since his death, each part of the Basilica has been built separately, one after the other, in order to reflect the new architectural styles of the different eras.

This mission has been successful, since his death, several generations of architects have succeeded one another in carrying out this work, which will be completed in 2026, the year of the centenary of Gaudí's death, not without some controversy.

Worldwide recognition
The work carried out during his lifetime, i.e. the Nativity facade, the St Barnabas tower, and part of the outer side of the apse wall, was declared a World Heritage Site by UNESCO in 2005.

The Sagrada Família Basilica was consecrated by Pope Benedict XVI on 7 November 2010.