What to see inside the Sagrada Familia?

The Sagrada Familia Inside is visited mainly for the stained glass windows, the apse, the altar, the crypt, and the museum. But above all, you have to let yourself be immersed in the place.

Like the exterior, the interior of the Sagrada Familia is striking in its size and dazzling in its religious, naturalistic, and simply poetic charge. A divine atmosphere seems to surround every visitor. It is difficult not to be caught up in this mystical aura intended by Gaudí. A place of worship, but above all a modernist masterpiece that leaves no one unmoved. 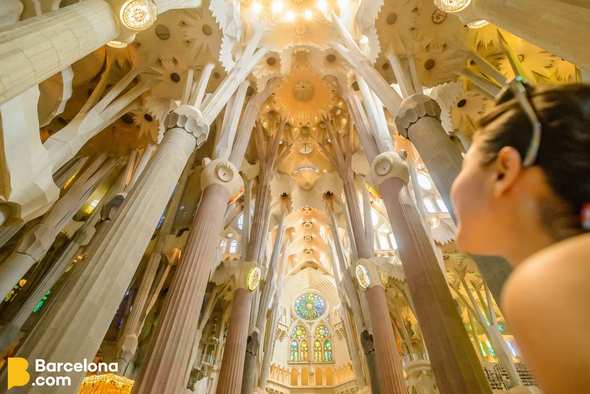 A church for eternity. Nature as a source of inspiration

Gaudí drew on his extensive knowledge of religion and liturgy to create a new form of religious architecture known as naturalist-modernist. This church should be a hymn to God. Each stone should represent a stanza in his praise. According to his vision, the interior of the Sagrada Familia Inside evokes the worship of the universal Church and the veneration of the heavenly Jerusalem. This is an immense ambition when we know that for Christians it is the place where the sons and daughters of God will live their eternity.

“Nothing is invented, because nature has already written everything. Originality always consists in returning to the origins" A. Gaudí

His second source of inspiration is nature. It is everywhere in his unique style. Everything is organic, everything is copied from his observations. There are no straight lines in nature, everything will be structured from curves. You don't walk into a church, you walk into a forest with such surprising light! Visiting the Sagrada Familia is the most incredible dreamlike experience.

The stained glass windows of the expiatory temple

"Glory is light. Light gives joy, joy is the joy of the spirit" said Gaudí, who would have been amazed by the work of the Catalan painter Joan Vila-Gra, who was responsible for the stained glass windows of the Sagrada Familia. We owe him in particular the window of the Resurrection. For the visitor, it is a shock to be overwhelmed by a veritable symphony of color and light. 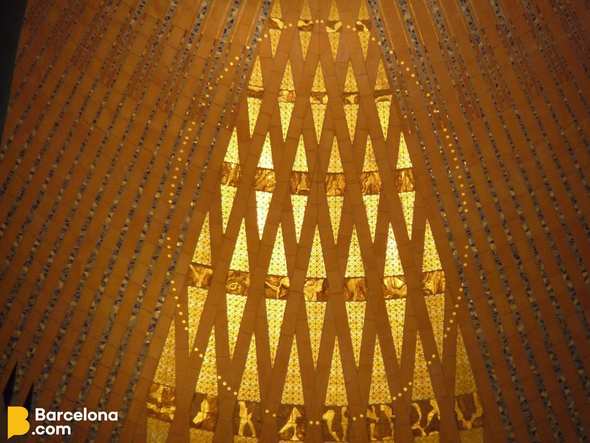 An impression of celestial harmony. The same visitor will also notice seven rays falling from the upper part of the apse, symbolizing the Holy Spirit. Between dream and symbolism, light is an essential element of Gaudí's religious imagery. Its most masterful expression is undoubtedly in this basilica more than in any other of Gaudí's creations.

The main altar of the Basilica

The neo-Gothic apse houses the altar. It was built above the crypt between 1890 and 1893 in accordance with the intentions of Villar, the first architect of the Basilica. The main altar, placed two meters higher than the general level, is surrounded by the seven chapels of the apse dedicated to the seven Sorrows and Joys of Saint Joseph. 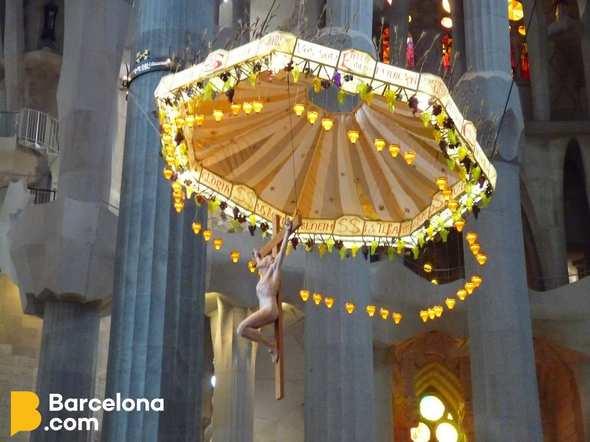 If the altar itself seems austere, with a simple crucifix as an ornament. The impression left by this most symbolic place in the basilica is breathtaking with its large canopy suspended twelve metres high. Numerous statues decorate the apse, including those of Saint Anthony, Benedict of Nursia, Saint Bruno the Carthusian, Saint Francis of Assisi, Saint Clare, and Saint Eloi, founding saints of various orders. Nature is always present with a crown of thorns for the initials of Jesus, wheat as a symbol of the Eucharist, and animals: salamanders, snakes, chameleons, snails, lizards, frogs...

The crypt is a chapel where masses are regularly celebrated. It is located under the apse and is accessed by a staircase. This large subterranean space is surmounted by a large vault on which can be seen a sculpted and coloured representation of the Annunciation of Mary. Its main altar, decorated with an altarpiece depicting the Holy Family, was made by the sculptor Josep Llimona. It is surrounded by four chapels dedicated to the Virgin of Carmel (where Gaudí is buried), Jesus Christ, the Virgin of Montserrat and the Crucified Christ (where the tomb of Josep María Bocabella, the initiator of the Sagrada Familia, is located). The floor of the crypt is decorated with a Roman mosaic, representing ears of wheat and vines.

Finally, a visit to the Sagrada Familia Museum is a must to understand Gaudí's creative process, his construction techniques, and the history of the temple from its beginnings. Here you will find plans, drafts, models, and photos that explain the history and creation of the basilica, from its conception to its future completion.

Still inside the Sagrada Familia, the museum is next to the crypt. It was in this same space that Gaudí worked during the last years of his life. 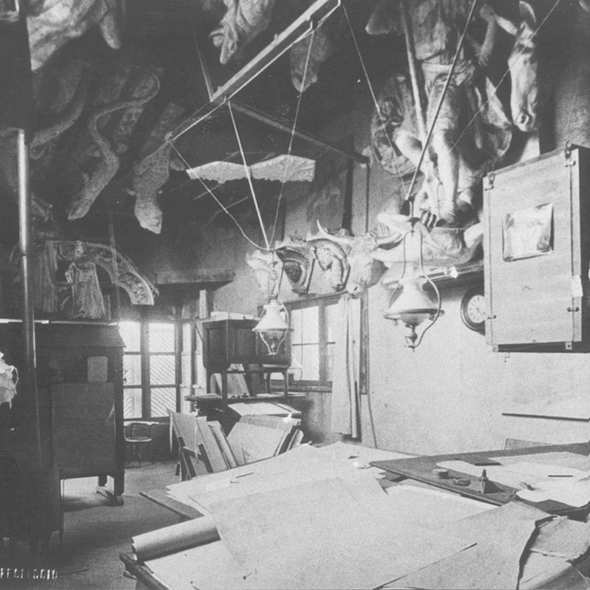 This studio was burnt down in 1936 during the Spanish Civil War. Many of Gaudí's drawings and plaster models were destroyed, to the point of jeopardizing the rest of the building work. Today, in a space of more than 120m2, the museum nevertheless exhibits formidable elements useful for understanding his work.

Audiovisual displays on Gaudí's work and life, a model of the windows of the central nave, sketches, drawings, and models by Josep Maria Subirachs, sculptures of the Nativity facade, and a formidable model of the polyfunicular of the church in the Güell colony. A 4-meter high upside-down model that shows with strings and weights how Gaudí calculated the load and curvature of the vaults of his constructions.

Last comment
a dream!
david (5 May 2022 - 10:22)
Inside Sagrada Familia is fantastic, I can only advise you to visit it and take your time, it's just magical.
The towers are also worth it !!
Add a new comment View comments