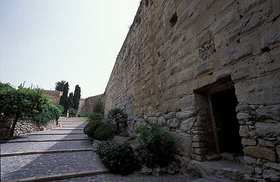 The Tarragona Archaeological Walk goes along the most well preserved parts of the roman Archaeological walls surrounding Tarragona centre, including the "Minerva", "Cabiscol" and the "Arquebisbe" towers.
All these towers were constructed between the 3rd and the 2nd century B.C. on top of two lines of stones but on the Arquebisbe tower there were as many as 7 lines of stones