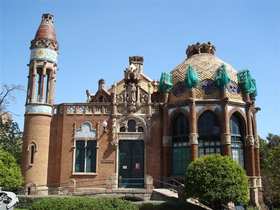 In 1401, six hospitals in the city of Barcelona merged to form the Hospital de la Santa Creu, a fine example of civilian gothic architecture. With the growth of the city and the advances in medicine in the 19th century, the centre was unable to meet the demands of the time and construction of a new building was proposed.

Thanks to the legacy of Pau Gil, a banker, the first stone of the new building was laid on January 15th, 1902. “Sant Pau” was added to the old name of “ la Santa Creu” to honour the wishes of its benefactor. The architect Lluís Domènech i Montaner was commissioned with the project.

Its architectural and patrimonial value extends beyond its urban location and the site has won European and international acclaim. In 1997, together with the Palau de la Música Catalana (one of the world's leading concert halls), it was declared World Heritage by UNESCO for its singular architectural and artistic beauty