Barcelona's society wanted to see great changes and make great advances, in every field. The great Catalan international exhibitions, like the huge industrial exhibition of 1888 in Barcelona, demonstrated this national pride. 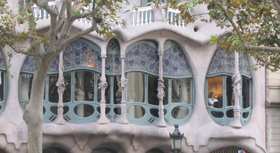 Three buildings of the early 1880's seem to mark the beginnings of Modernism : The publishing house of Montaner i Simon(1880), Josep Vilaseca's factory for F. Vidal (1884) and  Gaudi's Casa Vicens (1883). All three flow from a revival of a Spanish style: the neo-Mudejar, with the use of Moorish decorative forms and techniques as characteristics. Modernism seems to have begun earlier and ended later than in most countries in Europe.

The Modernist architects expressed themselves in different ways, some wanted to revive Romanesque architecture, others imported the French neo-Gothicism of Violet le Duc, others still searching for a modern style in Germany, Austria or France. What seems to be characteristic is the use of nature-forms: flowers, plants and animals, decorative forms in ironwork, ceramics and stained glass. The aim was to create a modern art based on Catalan traditions, mixed with the use of new materials, like cast and wrought iron.

All about the Sagrada Familia