Barcelona acquired certain supremacy on all the Catalan countries. The city had a dominating role in the confederation Catalonia-Aragon and became a maritime power in the Mediterranean. 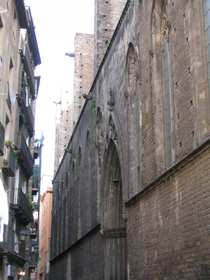 From this flourishing time, it remains a Barri Gotic full of institutional buildings (Palau de la Generalitat with the church of Sant Jordi, Ajuntament and Saló de cent) but also the Royal Palaces (Palau Reial Major, residence of the Counts Of Barcelona). Among its Romanesque and Gothic inheritance, Barcelona also counts with the Cathedral (its three naves, its crypt devoted to Saint Eulalia, its cloister and its front built between the end of the XIII century and the beginning of the XX century), The Church Santa Maria del Mar (dating from the XIV century and regarded as the jewel of the Catalan Gothic Art due to the purity of its lines and the harmony of its proportions) without forgetting many commercial buildings ( Reials Drassanes: the largest Medieval shipyards of the world), it reflects a powerful church and middle class.