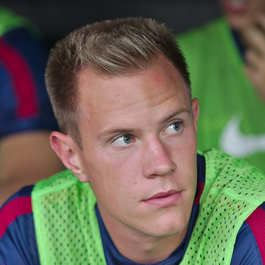 Marc-André ter Stegen, born 30 April 1992) is a German professional footballer who plays as a goalkeeper for Spanish club Barcelona.
After four seasons in the Bundesliga with Borussia Mönchengladbach, making 108 league appearances, he joined Barcelona in 2014.
He won the treble in his first season in Spain, playing in Barcelona's wins in the Copa del Rey and UEFA Champions League.

Ter Stegen has represented Germany at several youth levels and made his senior international debut in 2012.

At the FC Barcelona
On 19 May 2014, Ter Stegen was announced as the new goalkeeper of Spanish club Barcelona, after the departures of Víctor Valdés and José Manuel Pinto, effective during the summer transfer window.

After the move, Ter Stegen said joining the club was the right move and that he aimed to settle at the club.
Days after signing for Barcelona, Ter Stegen was unveiled at the stadium of Camp Nou and dismissed his comparison to Valdés, insisting: "I am who I am and that’s that".

Winter 2021: Visit the two most iconic monuments of the great architect Antoni Gaudí: the Sagrada Família and the Park Güell. Enjoy skip the lines tickets and audioguide app in your own language. Covid 19: both visits comply with the health measures in effect.