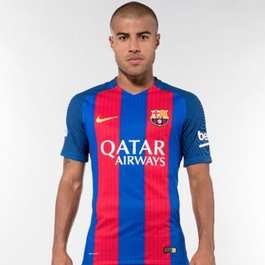 Rafael Alcántara do Nascimento, born 12 February 1993, commonly known as Rafinha, is a Brazilian professional footballer who plays as an attacking midfielder for Spanish club FC Barcelona and the Brazil national team.
Rafinha started his career with Barcelona, making his debut with the first team in 2011.

After a loan at Celta de Vigo, he played his first league match for the Catalans in 2014.

Rafinha represented both Spain and Brazil at youth level before debuting with the latter at senior level in 2015.

On 27 June 2013, Rafinha extended his contract with Barça, keeping him at the club until 2016.
A few weeks later, he was loaned to fellow La Liga team Celta de Vigo and made his debut in the main category of Spanish football on 19 August, helping the Galicians to a 2–2 home draw against RCD Espanyol.

Rafinha made his top flight debut for Barcelona on 24 August 2014 at the Camp Nou, in Luis Enrique's first match in charge. He played the first half of an eventual 3–0 win over Elche CF before being substituted for Marc Bartra.
On 25 November, he assisted Lionel Messi's goal in a 4–0 win at Cypriot club APOEL, which made him the outright top scorer in the history of the UEFA Champions League; however, Rafinha was sent off for two bookings later on in the match.

Rafinha scored his first goal for Barcelona on 3 December, concluding a 4–0 win at SD Huesca in the first leg of the Copa del Rey's last 32 (12–1 aggregate).
The following 1 February, he recorded his first goal for the team in La Liga, part of a 3–2 home win over Villarreal CF. Barcelona won the treble, with Rafinha an unused substitute in the domestic and European finals.
With compatriot Neymar out through illness, Rafinha started on the left of Barcelona's attack in the 2015 UEFA Super Cup against Sevilla FC in Tbilisi, scoring the club's third goal in a 5–4 triumph.