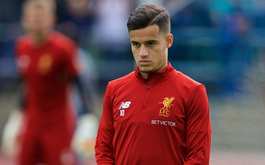 Philippe Coutinho Correia is a Brazilian professional footballer who played as an attacking midfielder for Premier League’s team of Liverpool and the Brazilian national team before arriving at the FC Barcelona in 2018.

Born June 12, 1992 and raised in Rio de Janeiro, Coutinho shows an extraordinary talent and excels in his youth with the Vasco da Gama. Very quickly his career took off, in 2009 he signed with Italian club of the Inter Milan for 4 million euros before a brief return to Vasco da Gama where he became a key player. Back in Milan in 2010 he is considered the "future of Inter" but must fight to take his place the first team of the club. In fact, in 2012 he is once again loaned to the Spanish club RDC Espanyol.

The year 2013 is a turning point in the career of the Brazilian. He makes a commitment to Liverpool in England where the English team will give him time to express himself. Little by little, Coutinho became an essential cog in the game of the Reds and became known in Europe for his performances.

At Anfield, the combination of his vision of the game, passing, dribbling and long-range strikes earned him the nickname “Little Magician” from both fans and Liverpool teammates. After being named to the 2015 PFA team, Brazilian legend Pelé told him he had a "big future".

His career :
Coutinho made his senior debut in Brazil in 2010 at the age of 18. He has since made more than 30 appearances and represented the nation at Copa America 2015 and Copa America Centenario.

A major operation for the Catalan club, which wanted to attract Coutinho in his nets since last summer..
Its starting clause is fixed at 400 M €. This is the highest transfer in the history of FC Barcelona. Coutinho's versatility and technical quality make him the natural successor of Andrés Iniesta.