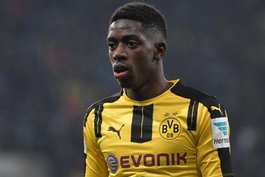 In 2015 he made his French Ligue 1 debut with Rennes and quickly becomes the revelation of the season in the league. He was chosen better hope, with twelve goals, including a hat-trick against Nantes. Quickly sought after by the best European clubs, he decides to continue his career at Dortmund, where he is transferred in May 2016.

On July 4, 2016, he returned to training under the colors of Borussia. A month and a half later, made its debut in the official competition with Borussia, in the occasion of the Supercopa of Germany, lost two goals to zero before the Bayern of Munich. Then, on 27 August 2016, made his first appearance in the Bundesliga, with FSV Mainz. Even if it was not decisive on this occasion, he impressed all his opponents, even defender Balogun described his performance as "incredible."

On August 28, 2016, Didier Deschamps calls him to play for the national team of France for a friendly match against Italy, and for a tie of the 2018 World Cup against Belarus. Therefore, on September 1, he made his first international game playing in the second half, replacing Antoine Griezmann against Italy.

With the FC Barcelona:

On August 5, 2017, FC Barcelona announced that it reached an agreement for the transfer of Ousmane Dembélé under their colors, for a compensation announced by the press of 105 million Euro bonus. The will of the leaders of the club is the replacement of Neymar, who left the club three weeks earlier to go to Paris Saint-Germain. Dembele receives the number 11, the same as his predecessor. This transfer is the second most expensive in the history of the soccer, after the one of Neymar, and the one of Paul Pogba in Manchester United a year before.

He signed a five-year contract with FC Barcelona on August 28, 2017, and was presented at the Camp Nou in front of 18,000 people. That same day, he explains that he did not come to Barcelona to "replace Neymar", considering that "there are important differences" between the Brazilian player and him.

Dembélé starts with Barca on September 9th, 2017 during the third day of the League against RCD Espanyol and gives a decisive pass to Luis Suarez (5-0). On the fourth day of the League game against Getafe, Dembélé is injured in the 25th minute on a heel. Victim of a ruptured tendon of the femoral biceps of the left thigh he is operated in Finland and will not be able to play for several months ...