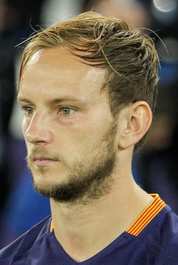 Ivan Rakitić, born 10 March 1988, is a Croatian professional footballer who plays as a central or attacking midfielder for Spanish club FC Barcelona and the Croatia national team.
Rakitić was born in Möhlin in the Swiss canton of Aarau to a Croatian family of Šokci origin.
His father, Luka, and his family are originally from Sikirevci, while his mother's family are Bosnian Croats from Žepče

Rakitić started his professional career at Basel and spent two seasons with them before he was signed by Schalke 04.
After spending three-and-a-half seasons in the Bundesliga, he was signed by Sevilla in January 2011. Two years later, Rakitić was confirmed as the club captain and captained the team to UEFA Europa League triumph.
In June 2014, Barcelona and Sevilla reached an agreement on the transfer of Rakitić. In his first season with Barça, he won the treble of La Liga, Copa del Rey and UEFA Champions League.
He scored the first goal of the 2015 Champions League Final and became the first player ever to win the Champions League one year after winning the Europa League while playing for two different clubs.

At the FC Barcelona
Upon his arrival in 2014, Rakitić was given the squad shirt number 4.
He made his debut for the team in a pre-season friendly match against French club Nice on 2 August, when he came on as a second-half substitute for Sergi Roberto.[38] During a pre-season friendly against HJK Helsinki, Rakitić provided his first assists for Barça, assisting twice in 6–0 victory. His official debut for Barcelona came on 24 August in the opening match of the new Primera División season, against Elche. Just moments after the half-time break, Rakitić played a long ball over the top of Elche's defence towards forward Munir El Haddadi, who flicked it into the far corner of the net to make it 2–0 for Barcelona.

Rakitić's first goal for Barcelona came from outside of the penalty area in a 0–5 away win against Levante on 21 September 2014.