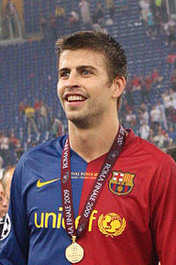 Gerard Piqué Bernabeu born 2nd February 1987 in Barcelona, is a Spanish footballer, currently playing as a centre back for Barcelona.

A product of Barça's cantera (La Masia), he initially left the club for Manchester United in 2004, where he remained for four years, before returning to Barcelona under Josep Guardiola's leadership, and helping Barça to become the first Spanish club ever to complete the treble. Piqué is the third player, after Marcel Desailly and Paulo Sousa, to have won the UEFA Champions League two years in a row with different teams.

Piqué has also represented the Spanish national team, making his debut on 11 February 2009, and as of September 2009, he has earned 13 caps, scoring 4 goals.

On 27 May 2008, Piqué signed a four-year contract with Barcelona, with a €50 million buy-out clause. Barcelona paid an undisclosed fee for the player.

Piqué's first goal for Barcelona came in the club's 5–2 UEFA Champions League group stage win at Sporting CP on 26 November 2008. His first domestic goal for the club followed two months later, on 29 January 2009, in a Copa del Rey match against local rivals Espanyol. The goal, which came from a corner kick in the 57th minute, turned out to be the game winner in a 3–2 victory for Barcelona.

Piqué scored his first league goal for Barcelona on 2 May 2009, in a 6–2 away thrashing of Real Madrid, in El Clásico. On 13 May 2009, he picked up the first trophy of his Barcelona career as he helped his club to a 4–1 victory over Athletic Bilbao in the Copa Del Rey final. Three days later, Barcelona clinched the league title after Real Madrid lost 3-2 to Villarreal, with two games left in the season.

He played against his former club Manchester United in the 2009 Champions League Final on 27 May, which Barcelona won 2–0, hence completing an historic treble. On 26 February 2010, Pique signed a contract extension that will keep him at Barcelona until at least the summer of 2015. On 28 April 2010, Pique scored in Barcelona's semi-final second leg against Internazionale, scoring the only Barcelona goal of the game. Barcelona lost 3-2 on aggregate.