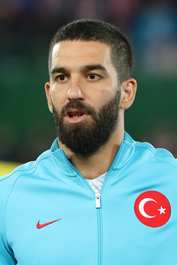 Arda Turan (born 30 January 1987) is a Turkish professional footballer who plays as an attacking midfielder for Spanish club FC Barcelona and captains the Turkey national team.
He is mostly known for his ball control, dribbling skills, and vision.

At the FC Barcelona
On 6 July 2015, FC Barcelona announced the signing of Turan from Atlético for €34 million, plus €7 million in variables. The contract will run for five seasons, but Turan would only be able to debut for the Catalans in January 2016, after Barcelona's transfer ban had been lifted.[25] On 29 December 2015, Turan picked number 7 for his shirt.

Started the game in starting line-up, Turan made his debut on 6 January 2016, Wednesday, in a Derbi barceloní encounter taken place at the first leg of round of 16 Copa del Rey, which ended 4–1 for Barcelona.
He placed a shot in the 2nd half that was saved by RCD Espanyol keeper Pau López.

Turan played his first league game with Barcelona on 9 January 2016, at 17th match-day home game against Granada CF, ended 4–0, in which he assisted Lionel Messi for the opener of the match.
On 17 August 2016, Turan scored twice and Lionel Messi once as Barcelona earned a 3-0 second-leg victory over Sevilla to win the 2016 Supercopa de España 5-0 on aggregate.