El Baix Empordá is the center part of Costa Brava. Its capital is La Bisbal d'Empordà, a place that has a tradition in making ceramic pottery...

El Baix Empordá is known as the "region of coves".

It occupies the centre of the Costa Brava and offers, among other many temptations, a sizeable array of culinary and commercial offerings, with many of its towns and villages as the backdrop of an intense activity most weekends of the year.

Sites that are truly "must-sees" include the Medes islands, located just off the coast across from the Montgrí massif, the coves of Begur, Calella de Palafrugell and the Sant Sebastià lighthouse,, in addition to the remains of the Iberian settlement at Ullastret and the medieval villages of Pals and Peratallada.

The capital city is La Bisbal d'Empordà, a place that has a tradition in making ceramic pottery.

Our selection of places that must be visited going down the coast:

One of the Baix Empordà's greatest ecological treasures is the Medes islands, a tiny archipelago located just off the coast of L'Estartit formed by seven islets characterised by the lavishness of its marine ecosystem. The proximity of the coast and of the mouth of the Ter river allow the Medes to nurture their unique flora and fauna with abundant amounts of organic matter. The Medes islands are a must visit for scuba divers, who can practise the sport in a regulated setting.

The tourism office in L'Estartit will give you all the necessary information to go the Illes Medes.

Under water vision at Las Medes.

As the name says, this company ships have transparent bottoms so passengers can discover the marine life in the Illes Medes. A first nice approach.

Torroella de Montgrí is a 13th Century residential village that invites a detour from the coast, to see its Town Hall square full of porticos, the 15C Gothic church, the palace of the Kings of Aragon and the Robert Palace as well as the walk to Montgri Castle or the Cau del Cur excavation site.

The Parc de Sobrestany is 40 hectares park where you will find 30 different animal species. Very nice for the little ones. The older ones will enjoy the cuisine in the Hotel Caçador.

Pals is an old 10th Century village inland. The Gothic church, the clock tower of the old castle, the curtain walls and houses are magnificent sights for the beginning of a visit that may end at the fortified country houses in the vicinity. It is a town famous for its rice.

La (Sa) Punta restaurant is situated in the Platja de Pals, and its specialty is « arrosejat » with fruits from the sea, this is a classic when we talk about rice.

The Gala Dalí Castle in Púbol, open to the public since 1996, allows visitors to discover a medieval building in which Salvador Dalí lent material form to an exuberant creative effort with his mind set on one person, Gala.

The capital of the region is La Bisbal d'Empordà, a town with a longstanding pottery tradition that has been kept alive thanks to the activity of a good number of master craftsmen. The history and evolution of the pottery tradition is reflected in the recently inaugurated Terracotta-Pottery Museum of La Bisbal. The streets of the old quarter lead to the Plaça Major, or central square, the erstwhile parade grounds of the Episcopal castle. Built in the mid-11th century, the castle is considered one of the most important examples of the Catalan civil Romanesque style.

The fortified enclosure of Peratallada is characterised by its keep and the palace it shelters. The town streets preserve a typically medieval urban layout, with most of them emerging onto the main square. This village was discovered in 1937. In Sant Andreu Chapel you can see the objects that were found.

Opening hours : Open every day but Mondays from 16 to 20h.

Palafrugell is a little town 5 km from the coast, very popular in summer.

Calella de Palafrugell is an old fisherman port where in addition to admiring the most important species of flora in the Mediterranean, you will get a chance to hear great jazz during the prestigious Costa Brava Jazz Festival, held in this enclave in July and August.
The Palafrugell Cork Museum, which shows the cork transformation processes and machinery used in this industry's past, constitutes another of the area's interesting sites.
People go to this village for the traditional Concert of Habaneras that take place every year the first Saturday of July in Cala De Port.

Here you will encounter with very popular places: Sa Riera, Sa Tuna, Fornells, Aiguablava, Aigua- Xelida, Tamariu, Llafranc. The village Begur is well known for its castle, from where you can enjoy a marvellous view.

Palamós is a city with sea tradition that lives everyday from its Sea and offers you a nice contrast with the neighbour village Platja D'Aro that is full of tourists and great shops. You can walk along the port and in July you can participate in the Marine Processions during the festivity La Virgen del Carmen. There are concerts everyday in July and August during La Temporada de Verano, El Festival de la Canción Marinera or the famous Muestra de la Habanera. Palamos is also famous for its shrimps.

La Gamba is specialized in Palamos shrimps, chicken with lobster and black rice. You must try also Fideus Rossejats.

Medieval architecture endures in all its splendour in the Benedictine monastery at Sant Feliu de Guíxols. It is situated in the entrance of the town, there you can see a Fortified church, a cultural Centre, a History Museum and the Tourism Office.

Caldes de Malavella is a small village situated between sea and mountains, famous for its thermal springs and mineral water. We can still admire the Roman thermal baths, the ruins of the Castle of Malavella and the Roman chapel of Sant Esteve.

The Vichy Catalan Spa, an imposing building of neo-Mozarabic architecture dated 1881. Completely reformed, it is nowadays a modern hotel, which offers the latest techniques in balneotherapy. Paseo Dr. Furest, 32. Tel : 972 47 00 00.

Visit Barcelona from the Costa Daurada: discover the Sagrada Familia with a skip the line ticket. Take advantage of the hop-on hop-off bus to visit the city and its main monuments with 20% off for many attractions with our "Barcelona.com Day Pass". 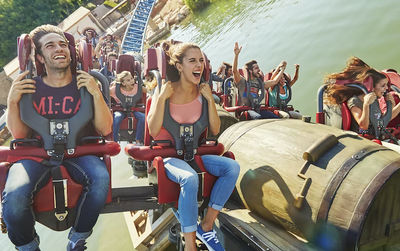 For children as well as adults..

> One hour from Barcelona!