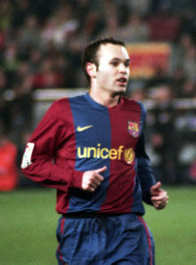 Andrés Iniesta Luján (born 11 May 1984 in Fuentealbilla, Albacete) is a Spanish attacking midfielder currently playing for FC Barcelona. He currently plays as a central midfielder for La Liga club FC Barcelona, and the Spanish national team and is a favourite amongst the Barça fans.

At the age of 12, Iniesta was spotted by Barça scouts at his local club Albacete Balompié. He was switftly signed and worked his way up the club ranks. Louis van Gaal handed him his debut on 29 October, 2002, a UEFA Champions League game against Club Brugge KV. He appeared eleven times in the league in 2003-04, mostly as a deputy for Camp Nou favourite Ronaldinho, as Barça sealed second place, scoring once.

In the 2004-05 season Iniesta successfully secured a permanent slot in the first team and figured in 37 of 38 league games - more than any other player. He displayed an unselfish attitude by regularly aiding strikers Samuel Eto'o and Ronaldinho but was unfortunate in front of goal - denied by the woodwork on several occasions, he found the net just twice.

Iniesta's improvement as a player continued in the 2005-06 and because of the absence of Xavi due to injury, he was given regular starts in midfield. The increased playing time offered to him at the highest level gave him the opportunity to blossom into a superb midfielder. His contribution to the team was praised by Coach Frank Rijkaard. His callup to the Spanish squad for the World Cup came as no surprise to football pundits.

On the 22nd of August, 2006 Andres lifted the prestigious Joan Gamper Trophy as the captain of the team after defeating German side Bayern München 4-0.

His current contract with FC Barcelona ends in June of 2010. On July 19th he was linked with a move to rivals Real Madrid. Reports in newspapers suggested Real was prepared to pay 60 million euros for him which would trigger his release clause. However, he reiterated his desire to remain with Barça by saying "I can’t do anything about it but I’d like to insist once again that I want to stay here. When I say I want to retire in Barça, I say it with all my heart."

For the 2007/08 season, Iniesta has been given the number '8' shirt for Barça after it was vacated following Ludovic Giuly's transfer to A.S. Roma.

Iniesta is a versatile player who can play in a variety of midfield roles. He is usually used in a central midfield role - sometimes as a creative midfielder and sometimes as a holding midfielder. He has also played on the right hand side of midfield on occasion. During the match between Barcelona and PFC Levski Sofia in the UEFA Champions League 2006/07, Iniesta was playing the role of a striker instead of midfield and he scored twice in the two games that Barcelona played against them. He was also assigned to cover Steven Gerrard at the right flank, meaning he had to play as left back in the matches against Liverpool in the UEFA Champions League first knockout round in 2007 and performed considerably well.

He has good skill on the ball, great passing and movement all rounded off with a sound footballing brain. His superb passing has unhinged many resolute defences - he played a big part in the first Barça goal against Arsenal in the UEFA Champions League final of 2006. He also has the ability to win the ball, and is an extremely tidy player who works hard for the team.