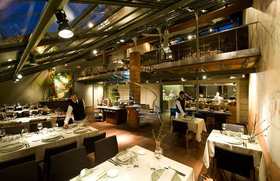 A whole villa of the XX century redecorated with lots of taste for a new way of cooking.
Three separate areas for different feelings: you will appreciate the mezzanine upstairs.
Part of the Tragaluz group which is synonymous of modernity and quality.
Cooking is from a modern Mediterranean inspiration like those creamy cauliflower soup with lychee granita and jam iberico or an excellent sea bass with an onion millefeuille and tomato marmalade. Last comment
decepcion
Rafael Leme (10 Sep 2019 - 11:14)
We’ Reached to Tragaluz through a very good friend indication, who highlighted the atmosphere.
Getting there, we were excited looking at the menu. We ordered 2 starters and a bottle of white wine. We had not decided yet the main course, but the waiter insisted we should and I was a bit rude saying we had not decided yet. First disappointment, I didn’t check what was the wine when it came, it was a Red wine, fortunately cheaper, but terrible.
The starters, tuna tartar the best thing of the night but very common, the lobster croquettes good but cold inside.
The main course, a cod( bacallao) was tasting absolutely nothing and a pork my wife ordered, not bad but ok.
I paid EUR 120.00 not cheap definitely and not the most expensive for sure, but one of the worst cost x benefit experiences we ever had.