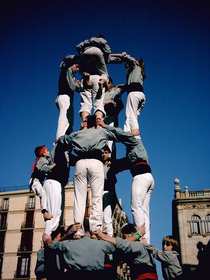 Once a year every town and city in Catalonia celebrates its Grand Festival. The streets fill with merrymakers who are only too glad to let strangers join in the fun. Many places keep up traditional customs of ancient origin. In the region of Tarragona you can wonder at the agility and strength of the Castellers as they build their spectacular human towers.

Teams of men stand on each others' shoulders in an effort to build the highest human tower. Each tower, which can be up to seven stores high, is topped by a small boy called the anxaneta. Castellers can be seen in action in many towns, especially Vilafranca del Penedès and Valls.

Last comment
Castellers
Jane (24 May 2013 - 10:15)
Will be in Barcelona June 18 - 17 and would love to see a Human Tower in Barcelona or a village not too many hours away by bus or train. Have checked calendars but not seeing an "action" during our stay. Please help! Thank you.
Add a new comment View comments