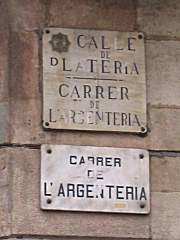 According to the Statute of Autonomy, Catalan is the official language in Catalonia, alongside Spanish, a language which, for social, cultural and political reasons has become implanted in the same territory. In addition, in 1990, the European Parliament passed a Resolution recognizing this identity, validity and use of the Catalan language in the context of the European Community.

Catalan, a Romanic language, is Catalonia's own original language. Between the 10th and 11th centuries, the Catalan language was already formed and clearly distinguished from its Latin source. There are Catalan texts dating from the 12th century: legal, economic, religious and historical text, scientific, philosophical and literary texts by Catalan sovereigns, tribunals, legal documents and administrative communication.

The Catalan language, with all its variants, is spoken over an area inhabited by ten million people. It is an official language of the state of Andorra and the Autonomous Communities of Catalonia, Valencia and the Balearic Islands. It is also spoken in part of the territory of the Autonomous Community of Aragon, the French department of Pyrénées Orientales and the town of Alghero in Sardinia.