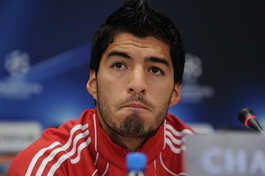 Luis Alberto Suárez Díaz, born 24 January 1987 is an Uruguayan professional footballer who plays as a striker for Spanish club FC Barcelona and the Uruguay national team.

Suárez began his career as a youth player for Nacional in 2003. He signed for Groningen in the Netherlands in 2006 and transferred to Ajax in 2007. In 2010 he helped Ajax win the KNVB Cup while becoming the league's top scorer with 35 goals in 33 games. He was also named Dutch Footballer of the Year, scoring 49 goals in all competitions. In the 2010–11 season, he scored his 100th Ajax goal, joining a group of players which include Johan Cruyff, Marco van Basten and Dennis Bergkamp. In January 2011, Suárez transferred to English Premier League club Liverpool for €26.5 million (£22.8 million). In February 2012, Suárez won the Football League Cup with the club.

At the FC Barcelona
On 11 July 2014, Suárez agreed with Barcelona on a five-year contract for a fee of £64.98 million (€82.3 million), making him one of the most expensive players in world football history.

In April 2014, he was named the PFA Players' Player of the Year and the FWA Footballer of the Year. As the Premier League's top scorer with 31 goals he won the Premier League Golden Boot, and shared the European Golden Shoe with Cristiano Ronaldo.
In his first season at Barcelona, Suárez starred alongside Lionel Messi and Neymar, an attacking trio dubbed MSN (Messi, Suárez, Neymar), and helped the club win the continental treble of La Liga, Copa del Rey and the UEFA Champions League.
In his second season at the club, Suárez won his first Pichichi Trophy as well as his second European Golden Shoe, for which, he became the first player since 2009 to win both awards other than Messi or Ronaldo.