One of the highlights of Park Güell is the monumental staircase, an imposing structure covered in colourful ceramic mosaics and supported by columns in the shape of tree trunks. This staircase is one of the main attractions of the park, and it appears at the entrance of the park, facing you.

Three fountains in the centre of the monumental staircase

In front of you, at a height of more than eight metres, are four series of stairs with three small fountain islands in their centre.

These organically shaped fountains are also, as always with Antoni Gaudí, a source of symbolic messages. 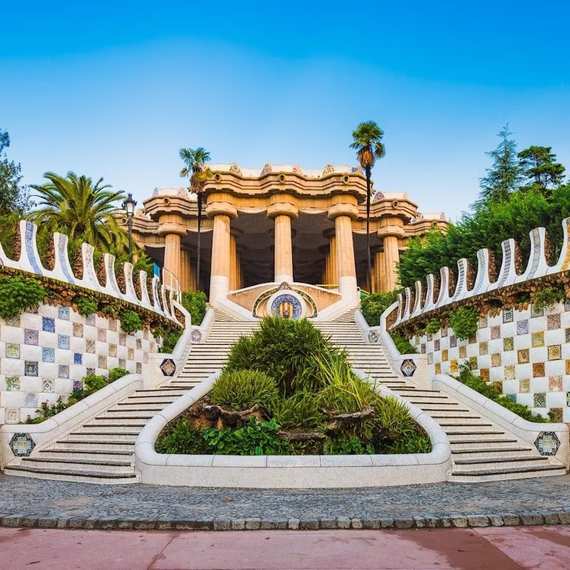 The first fountain evokes a circle symbolising the world, interlaced with a graduated compass, the tool of an architect. Imitation trunks are arranged around it, through which the water flows. It is said to represent a region known as Argenterie in Catalonia.

The second fountain has a dragon's head emerging from the Catalan flag, a reference to the legend of Saint George. This legend was taken up by Gaudí at the same time for the construction of the Casa Batllo  (1904-1906). 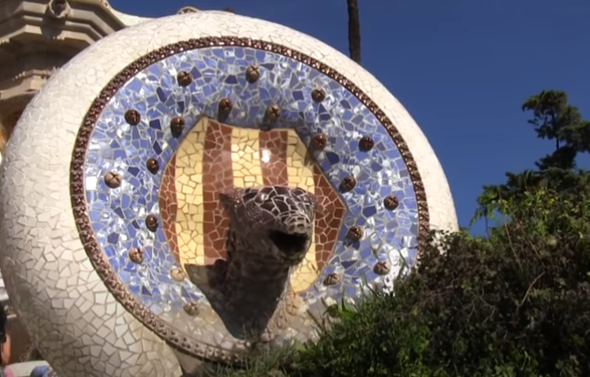 The third and most famous fountain features a dragon symbolising fire which is interpreted as a lizard.

According to legend, the salamander is an animal that symbolises the ability to resist fire, due to its ability to extinguish flames by wrapping itself around them. This fountain is therefore interpreted as a symbol of fire and resistance. The inspiration for this fountain came from the "Jardins de la Fontaine" in Nîmes, a town in the south of France not far from Barcelona, where Gaudí spent part of his youth. 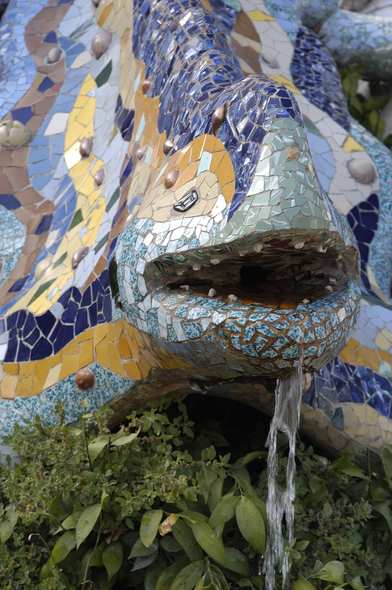 The emblematic "El Drac" -the dragon in Catalan- of Park Güell is the most famous and popular attraction of the park. Arm yourself with patience in the midst of summer to take a photo or a selfie.

The lizard was made using mosaic shards, a style known as trencadís. The mosaic creature is thus made up of ceramic, marble or glass tiles - of various colours and sizes, arranged asymmetrically. This was a major technique of Modernist art, of which Antoni Gaudí was one of the most fervent users.

At the top of these stairs, one reaches the hypostyle room.