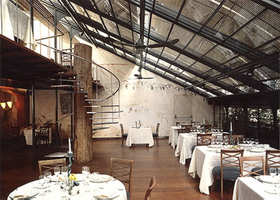 Último comentario
Tragaluz
Elle (21 may 2012 - 09:45)
Our hotel recommended we eat at Tragaluz (Oct 2011), the food was SO amazing, we ended up eating dinner there twice! My dad is in Barcelona today & he will be eating there as well. Sit upstairs and save room for dessert, you can't go wrong with any of them!
Añada un nuevo comentario Ver los comentarios