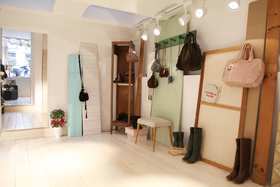 The brand name is composed of two words:

- Mimótica: The science of making things with care.

- Micola: Last name of our designer and founder of the brand: Raquel Micola.

The history of Mimótica Micola was born from the stubborness of the designer and founder of the brand, Raquel Micola.

Raquel has always been little girl very stubborn. The type of girl who will choose what shoes to wear each morning, and does not accept others. As she grew, Raquel searched for bags everywhere. As there was none she liked, she decided to make them herself. That's how, in 2003, began the story of a small brand called Mimótica Micola.

Raquel graduated in Translation and Interpretation, she learned to sew as a child in long evenings on the couch eating candy from her grandmother, seamstress specialized in arranging costumes that had been gored bullfighters.

Raquel has inherited a taste for the care of the details. Years later, Raquel met Oscar, a computer engineer as stubborn as she was. They got along well. Together, after many adventures, they gave final shape to the not so small brand it is today Mimótica Micola.

Its products are distributed throughout Europe and late last year opened its first store in Barcelona on Calle Provenza 274.

Bull Fille is a collection of accessories brand inspired by the familiar and safe little world where you are looking for prosperity and peace. A bubble where everything is as we want it to be. This store is full of rich and beautiful things. It smells like fresh cut roses, pillows embroidered with the initials, the candles are never finished and there is always biscuits in the oven. Vinyl sound of French music of the 60's. Last comment
My favorite bag!
Marcia (18 Dec 2011 - 07:30)
I bought the most amazing bag in that shop! The shop assistant help me decide as i could have bought many of them!
Really nice store and very nice stuff at good price!
Add a new comment View comments